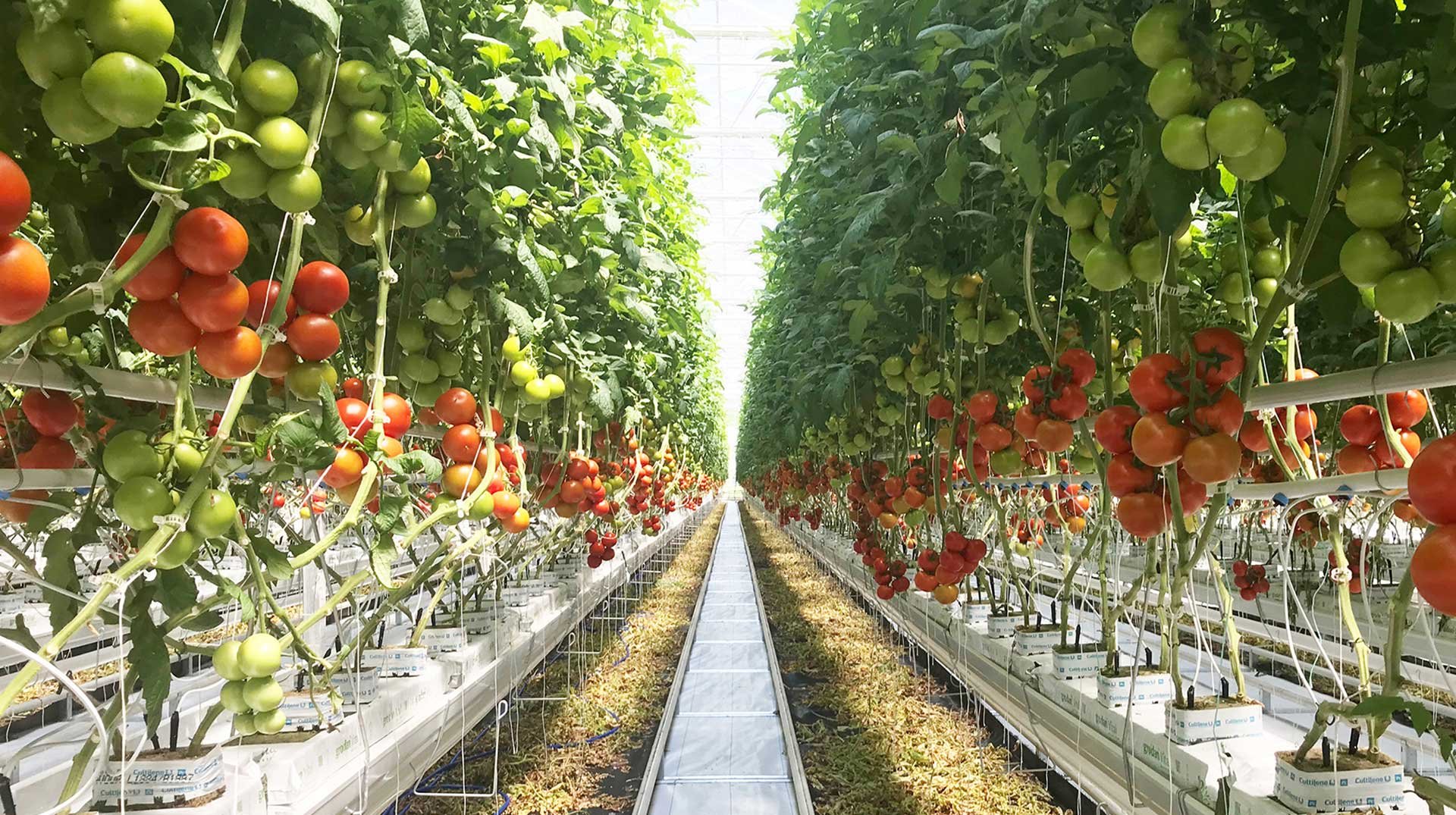 HURON — It’s quite a tall order to start growing 250,000 plants, let their vines reach 55 feet high and harvest them all within a two-month time frame.

But executives supervising a $70 million privately funded, groundbreaking agriculture venture in Huron remain confident they can produce and achieve this desired outcome.

Up to 250,000 individual tomatoes are growing from inside there. Since workers seeded several types of tomatoes — cluster, beefsteak, cocktail, roma, cherry and more — on March 15, they continue to sprout and develop into flavorful fruits.

By May 15, executives expect workers to pick these tomatoes off their vines and transport them to supermarkets, including Kroger and Wal-Mart, selling Mucci Farms products.

“This is a ‘short crop’ because of how late we planted in the season,” company CEO Bert Mucci said, who added his workers can grow and harvest tomatoes from the initial crop of vines up until Aug. 15. Come Sept. 15, employees will restart the entire planting process, growing tomatoes off entirely new vines. “The winter has been the reason. We knew it would be a struggle, but it’s nothing out of the ordinary for us, and we’re working toward our goal.”

The first greenhouse growing tomatoes, paired with a warehouse for shipping and distribution purposes, represents Mucci Farms’ initial phase in Huron. The base is located on Rye Beach Road near BGSU Firelands.

Ideally, the company wants to operate two additional and adjacent greenhouses, each also sized at 25 acres. Once all three greenhouses go live, workers can grow more tomatoes in addition to the company’s other trademark products: cucumbers, peppers, eggplants and strawberries, among others. They could be built within a year.

The reality of and future prospects for Mucci Farms excites many, including Huron city councilwoman Christine Crawford. She, along with other city and Erie County officials, toured the facility Thursday.

“We are so fortunate to have them and the new wave of agriculture right here in Huron,” Crawford said. “We are already seeing many benefits of Mucci Farms being here. The real estate market is seeing an uptick. There are some bidding wars on properties. It’s a direct result of Mucci Farms. There is also the positive perception we, as a city, are showing to other businesses and industries looking for a receptive, friendly environment to try something new.”

Q: What is Mucci Farms, and how does the operation work?

A: Since the 1960s, Mucci (pronounced moo-chee) Farms has grown non-GMO produce — specializing in tomatoes, cucumbers, peppers, eggplants and strawberries — inside factory-size greenhouses.

Sophisticated, energy-efficient systems for heating and electricity create an ideal environment to grow crops year-round, no matter if it’s 90 degrees and humid in July or 10 below zero in January.

The high-wattage lighting system helps products, in a matter of weeks, mature from tiny seeds to fully grown crops dangling off vines upward of 55 feet high.

“We have to make sure, especially in the wintertime, that we keep a consistent climate,” said Dave Loewen, Mucci Farms’ general manager, who’s helping supervising efforts in Huron. “We are basically trying to create summer inside all year so the crops can grow optimally.”

Then there’s a computer-controlled irrigation program, which knows exactly when an individual plant needs more or less water. Sitting and growing in its own station, a “growing medium,” each crop receives an individual spigot to receive proper nutrients.

Mucci Farms, which operates five facilities and about 175 acres in Canada, incorporates a hydroponic process, meaning it relies on water and not soil to grow crops. With tomatoes, for instance, they need enough minerals so their vines can grow.

“The whole locally grown concept has really taken off,” company CEO Bert Mucci said. “That is what the wholesalers and retailers want.”

Yet the company doesn’t completely ignore the outdoor elements. Combining both systems, Mucci executives contend, yields better tasting and overall healthier foods. For instance, at the Huron base, workers installed 200 hives containing about 100 bees in its initial greenhouse.

“Mother Nature is still active in our greenhouse ecosystem,” according to a company statement. “Bees fly around to pollinate the plants and, rather than pesticides, we use a program … where ‘good bugs,’ such as ladybugs, prey on ‘bad bugs.’ Additionally, we’re able to use a fraction of the land and water that traditional farming requires high yields and by sterilizing and recirculating our run-off water.”

Q: Why would Mucci Farms want to locate a base in Huron?

A: Bert Mucci explained why Huron represents the perfect location for his company’s first U.S. base.

“It’s a unique opportunity for us because of (Huron’s) proximity to our markets and our headquarters,” Mucci said. “About 65% of our production right now is delivered across the border (from Canada to the U.S.). Because of that, being in the U.S. is really attractive to us.”

Q: Are there any other reasons Mucci is coming to Huron?

A: Mucci Farms came to the city because Huron Public Power could promise the company the least expensive electric rate for the greenhouses.

The company will install blackout curtains to cut down on light pollution, ensuring people aren’t disturbed at night.

Q: Who else benefits from this deal?

A: Several entities stand to reap the windfalls of a $70 million investment.

For starters, Huron Schools would receive an injection of property tax money from new development.

The 100 initial jobs created would also lower unemployment levels and no doubt stimulate the local economy, according to area officials.

Plus retail giants purchasing Mucci-made produce would recognize Huron as a key location for their operations, a possible prelude to more development within the area.

Q: How can I inquire about employment opportunities in Huron?

A: Executives eventually want to hire 250 workers. People can apply for jobs by visiting muccifarms.com/careers or stopping by the facility on Rye Beach Road near BGSU Firelands.