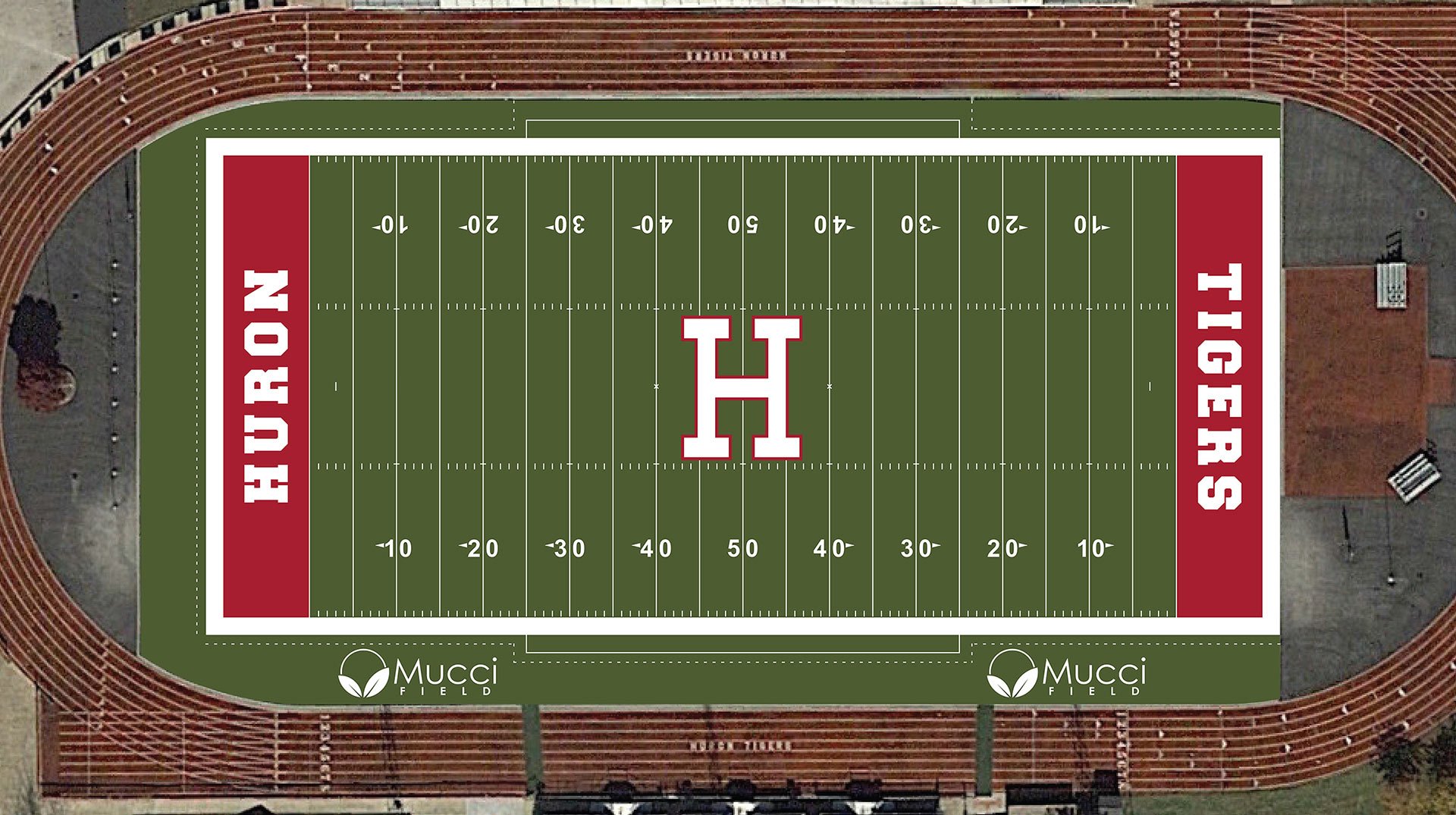 December 3rd, 2019 (Huron, Ohio) – Mucci Farms announces that they have partnered with the Huron Athletic Booster Club to finance a new turf at Huron Memorial Stadium, home of the Huron Tigers High School Football team.  The $400,000 (USD) sponsorship includes an 8-year naming rights agreement which will officially rename the venue to “Mucci Field at Huron Memorial Stadium” starting in the 2020 season.  “As we start our second harvesting season at our US Headquarters in Huron, we’ve been looking for ways to immerse ourselves into the community by helping out with some local events and projects,” said Bert Mucci, CEO of Mucci Farms.  “As small town people ourselves, we know how a local sports team can bring communities together so when Andy (White) introduced us to the Boosters and they told us that the turf was past due for replacement, we thought it was a relatable way for us to give back.”

The sponsorship was made possible through an introduction of Mucci Farms to the Huron Athletic Booster Club by Huron City Manager, Andy White.  “Since our first meetings with Mucci Farms in 2015 it was clear their intentions were to become a vested member of the community,” he remarked.  “Working through the ongoing development of the greenhouse project, a positive, yet indirect, affect on local business and agencies is there, but this specific collaboration and investment by Mucci Farms in Huron Memorial Stadium is huge. I'm very grateful for Mucci Farms being part of our community.”

Focused on strengthening public awareness, enthusiasm and support for various athletic programs in the community, The Huron Athletic Booster Club is a non-profit organization dedicated to student athletes in the Huron School District. “We are thrilled to partner with a great local company in Mucci Farms.  Our student athletes, administration, booster club, & community appreciates the generosity of the entire Mucci family,” said Amy Springer, Co-Vice President of the Huron Athletic Booster Club.

“On behalf of the Huron Athletic Department I want to thank Mucci Farms for their generosity for sponsoring the turf replacement at Huron Memorial Stadium,” remarked Stephen Camella, Huron District Athletic Director.  “Without Mucci's support this project would not have been possible.” Maumee Bay Turf Co. has been contracted to install the new turf which will take roughly 20 days to complete shortly after the track season, and it will be updated with the Mucci Farms logo on the sidelines. “We’re looking forward to supporting the Tigers on the new turf with several members of Team Mucci at the home opener in the spring,” concluded Bert Mucci.

Mucci Farms is a vertically integrated greenhouse farming company with over 250 acres of tomato, pepper, cucumber, lettuce and strawberry greenhouses in Kingsville and Leamington, Ontario with aggressive expansion plans underway locally and internationally.  Currently harvesting tomatoes on-the-vine from Phase 1 of their Huron, Ohio 25-acre greenhouse, the remaining 50 acres is being built in two additional phases to be completed in 2021.  The entire facility is equipped with High Pressure Sodium grow lights to allow for local production during the winter months.